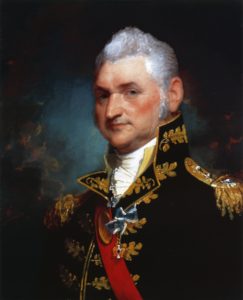 He was an Original Member of the New Hampshire Society of the Cincinnati, but subsequently was admitted a member of the Massachusetts Society by right of residence in 1813. Son of Simon and Sarah (Marston) Dearborn, he was born in Hampton, New Hampshire, February 23, 1751, died in Roxbury, Massachusetts, June 6, 1829. He began practice as a physician at Nottingham, Square, New Hampshire, in 1772, but took a special interest in military affairs, and employed such time as he could spare from his profession studying the art of war; Captain, company of Minute Men, April 19, 1775; Captain, 1st New Hampshire, April 23, 1775; taken prisoner at Quebec December 31, 1775; exchanged, March 10, 1777; Major, 3rd New Hampshire, March 19, 1777, to rank from November 8, 1776; Lieutenant Colonel, September 19, 1777; transferred to 1st New Hampshire, April 1, 1781, and served to March 21, 1783. After the war he removed to Monmouth, Maine, and in 1789 was appointed United States Marshal for that District; was elected a member of Congress in 1793, and served to terms. President Jefferson appointed him Secretary of War March 5, 1801, and he held that high Cabinet post until President Madison took office on March 7, 1809. He was then appointed Collector of the Port of Boston and filled that position until, on January 27, 1812, he was appointed Senior Major General, United States Army, and assigned to the command of the Northern Department; captured York (now Toronto), April 27, 1813; and Fort George a month later; was honorably discharged June 15, 1815. President Monroe appointed him Minister to Portugal in 1822. After serving two years he resigned, returned home, and settled in Roxbury. He published an account of the Battle of Bunker Hill, and wrote a journal of his expedition to Canada. A fine portrait of General Dearborn hangs in the State Capital at Concord, New Hampshire.

Henry Dearborn was the first Vice-President of the New Hampshire Society of the Cincinnati, serving from 1783-1784.